Much has been already said about what made Apple so wildly successful. Though there are many respects in which Apple did marginally better than its competitors, I believe Apple has two characteristics that are relatively unique:

At the time of writing, it is September 2017. The iPhone 8 has just launched, and the iPhone X is announced for October. By then, the following phones will be available for purchase:

That’s eight different phones. They are marginally differentiated along a number of axes: they differ in physical size, camera quality, memory, shape, headphone jack inclusion, etc. With unclear product differences but considerable price differences, it feels harder to make a choice than it should be. This is unlike the Apple of years past. The veritable explosion of models can be gauged from this iPhone production timeline: 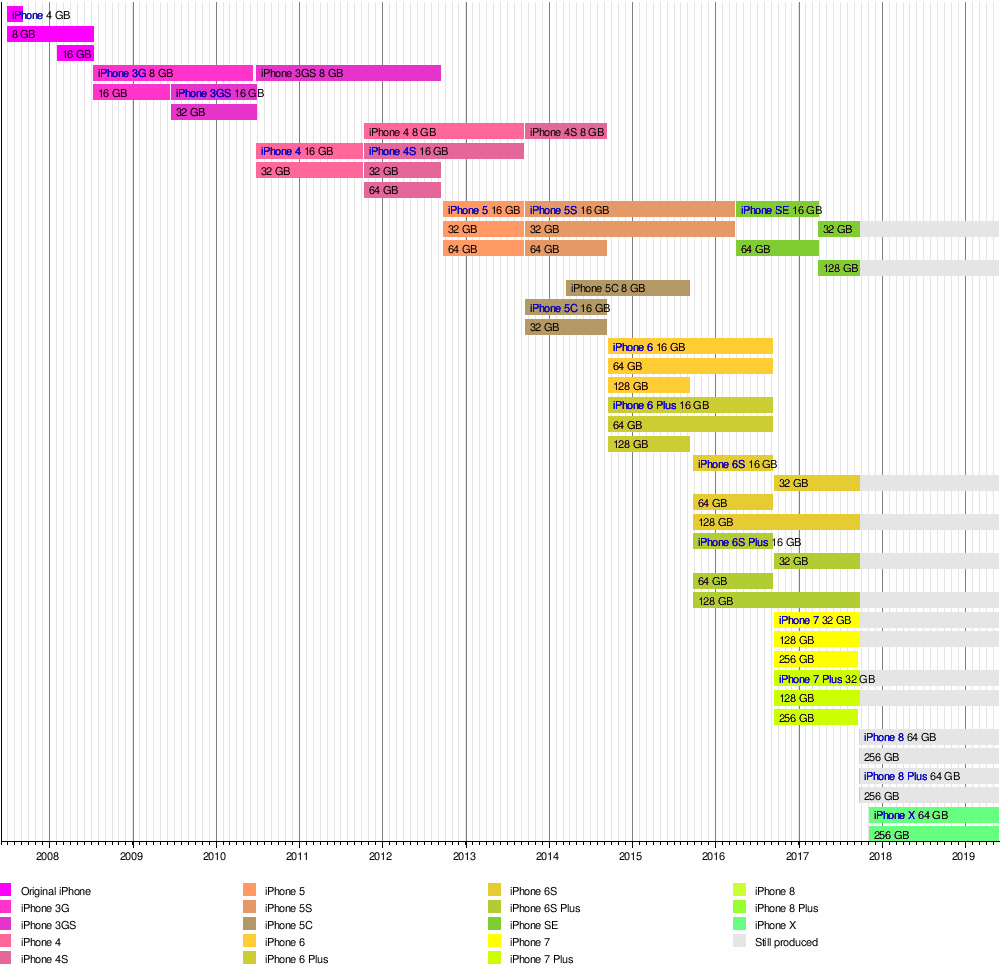 For the laptop line, we currently have the MacBook, MacBook Air, and MacBook Pro. The MacBook and MacBook Air are very similar product lines, essentially for the same use-case, so it’s surprising to see them offered concurrently. There’s a similar, but less convincing argument to be made for the two mid-size products currently offered in the iPad line.

There are two key takeaways from this observation:

Concerns about the present inform questions about the future. Some friends have suggested that the explosion in model lineup is likely to be met by a subsequent contraction or bifurcation, as has been the case for the MacBook. Apple skipping the number “9” between 8 and X suggests that the X represents a break from previous design philosophy. The notion that the iPhone may split into two separate lines seems plausible, though it’s not obvious how two lines of iPhone would be differentiated by anything other than physical size. It’s also possible that the iPhone X would act as a consolidator: with the physical size of the iPhone 8 and the screen size of the 8+, it seems like the best of both worlds.

Another past trend worth looking at is the iPod: as it matured over the course of the years, the breadth of available models exploded. There were five different lines: classic, mini, nano, shuffle, and touch, with many generations and special editions for each. However, they were never really consolidated: the iPhone obsoleted all of them at once. In this case, it’s hard to see the iPhone lineup being obsoleted by some new device any time soon.[1] As such, I note that Apple has no experience in recent history consolidating a manifold product line into a handful of core models. Granted, this seems to be exceedingly difficult in general — few brands do this well, if at all.

Looking at the iPhone’s current lineup, no definite conclusions can be drawn just yet. Apple’s in an interesting position, and there is much to be learned as we watch Apple manage this product over the next few years.

[0] Similar questions could be raised about the iPhone SE, since it’s a design holdout from the iPhone 5 era. However, it was released in 2016 and it’s a down-market product, so it makes sense that it hasn’t been retired just yet.

This work is licensed under a Creative Commons Attribution-NonCommercial-ShareAlike 4.0 International License.